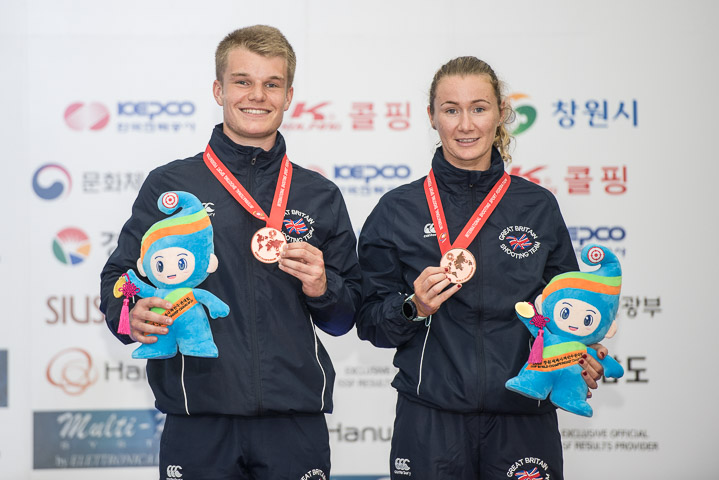 Over the summer, University of Surrey sports scholar Ollie Vass attained a bronze medal in Target Shooting for Great Britain at the ISSF World Championships.

After successfully making it through all qualifying rounds, Vass was ranked as the number one senior man by British Shooting.

Following this achievement, he was selected for international competitions in Italy and Germany, before making his way to South Korea for the World Championships.

“It was a real privilege to represent GB on the world stage.” Vass said.

“I was honoured to be an ambassador for Great Britain and the sport.”

Competing alongside teammate Rachel McManus, Vass put in an outstanding performance to place to help the duo place third behind two German teams.

“The adrenaline rush of crossing the finish line was a feeling that I will never forget.” Vass stated.

“Holding the GB flag with my teammate after the race was one of the proudest feelings I have ever had – it was something I will treasure forever.”

“I knew that it would be the toughest race of my life against the world’s best, but to walk away with a bronze medal was the best result I could have asked for.”

Vass was quick to praise the University and the scholarship scheme for the support provided during his time at Surrey.

“Without the support of the University it would not have been possible to achieve my goals.”

“As an athlete, it is extremely difficult to juggle academics, part-time work and training. Being supported in all aspects, not just financially, meant that I could focus on what was important.”

Vass will now begin to look ahead to the British Championships later this month, and then to the 2019 World Tour Championships in Italy and Germany.

Team Surrey would like to congratulate Ollie on this incredible achievement, and we wish him all the best of luck in his upcoming challenges.