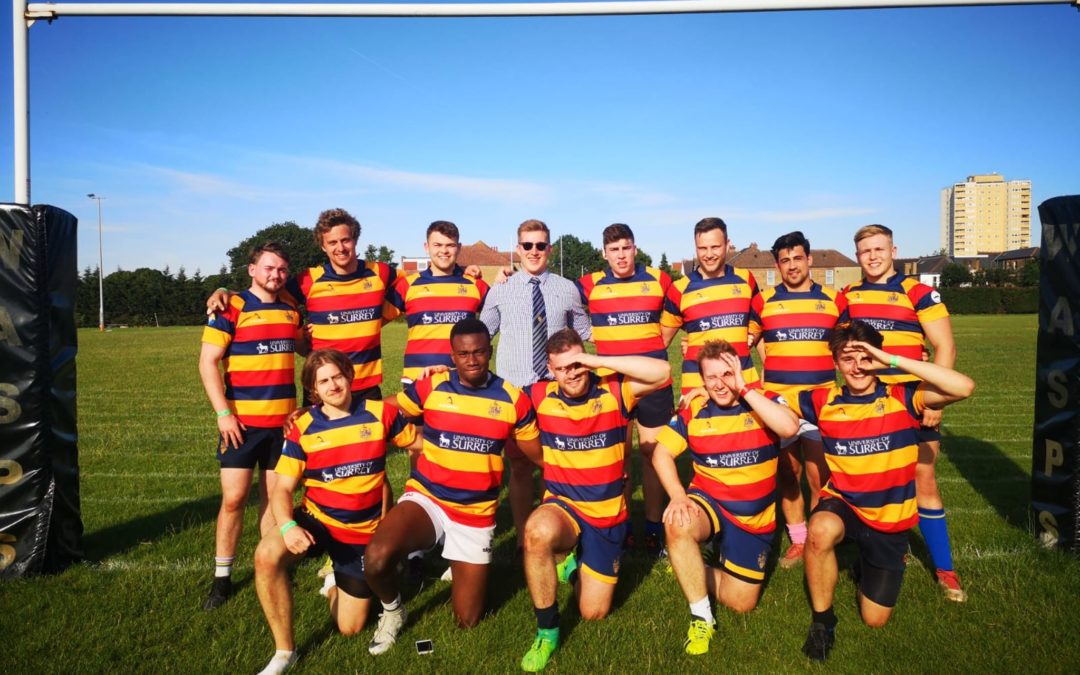 On the 22nd of June 2019, after years of discussing the possibilities of putting together a 7’s team for both the current student and the graduates the University of Surrey Old boy’s association put together a combined team of students and alumni and entered their first tournament as USRFC Alumni. The aim of the team Is to bring together current and past students on occasions other than Gradsport and build the University of Surrey rugby brand. The team entered the Men’s social London International Sevens Tournament 2019 (aka “LIT 7s”) at London Wasps Rugby club in West London.

After some drop outs in the week beforehand the team was left a few players short but thanks to Guilfordians Rugby Club 1XV Captain Tom Halsey we were able to field a squad of 12. Chairman of USRFC students James Kinnell was instrumental in the team’s performance as hydration engineer and manager, supplying the team throughout the day and sporting the club tie with pride. Vet Student Nick De Brett was also on hand as Coach, following a night shift at Liphook Equine Hospital.

Despite forgetting a ball, the team were feeling excited and ready for the day. The sun was shining and the anxious and unassuming USRFC Alumni took to the pitches for the pool games following a stellar stand in a circle pass the ball around and do some stretches warm up. The team were announced on the tannoy “USRFC Alumni! Here for a good time. Not for a long time”. To be fair that was what we wrote on our team description. Going into the tournament we had no idea what to expect. Below are the results.

Following a clean sheet in the pool games we were shocked and amazed. But mostly just glad we had a break to grab a bite to eat as the BBQ smelt amazing. More importantly we had mixed feelings about not being able to start on the beers. 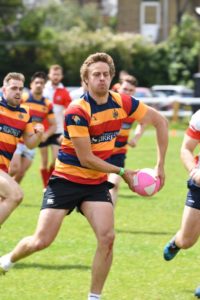 After all we had entered the social tournament. But after winning all three games we felt that we might have a good chance in the semi finals. We all went and enjoyed the festival atmosphere in the sun, grabbed a bit of bbq and lathered on the factor 50. After recouping our energy, we made our way over to the pitch for the semi final. After a brief warm up and some dubiously disallowed tries we won the game against For Jimmy’s 7s only to find out that the game we thought was the semi’s was actually the quarters… whoops!

Following a bit of confusion, we were hurried over to the semi final with no warm up, no idea who we were playing and no expectations. In a semi that saw 2 yellow cards, we were able to battle our way through to yet another win and one step closer to the final. Thanks to the hard working defence and a try saving tackle from George Sutcliffe.

The final of the tournament was set to be the hardest game we had played all day. Having played 5 games at this point we were shattered and could hear the bar calling out our names. We could also hear the voice of Natasha “Mo” Hunt England Women’s rugby player and Nick Heath sports journalist and commentator announcing our game. Next up USRFC Alumni. In a nail-biting final seeing our leading try scorer sustain a head injury and going down by 2 points before the half. We came back in the second half with some physical attack and solid defence to go on and win the match and the tournament!

All games on pitch 1 were live streamed on Youtube and Facebook and you can watch the following games USRFC vs London Japanese (1hr 54mins) &USRFC Alumni vs SW7’s (6hr 24mins) here: https://www.youtube.com/watch?v=Nt_n89Ph5tA

The team will next be playing in the 54th National Pub Sevens which will be held on Sunday 25th August at Harpenden rugby club.