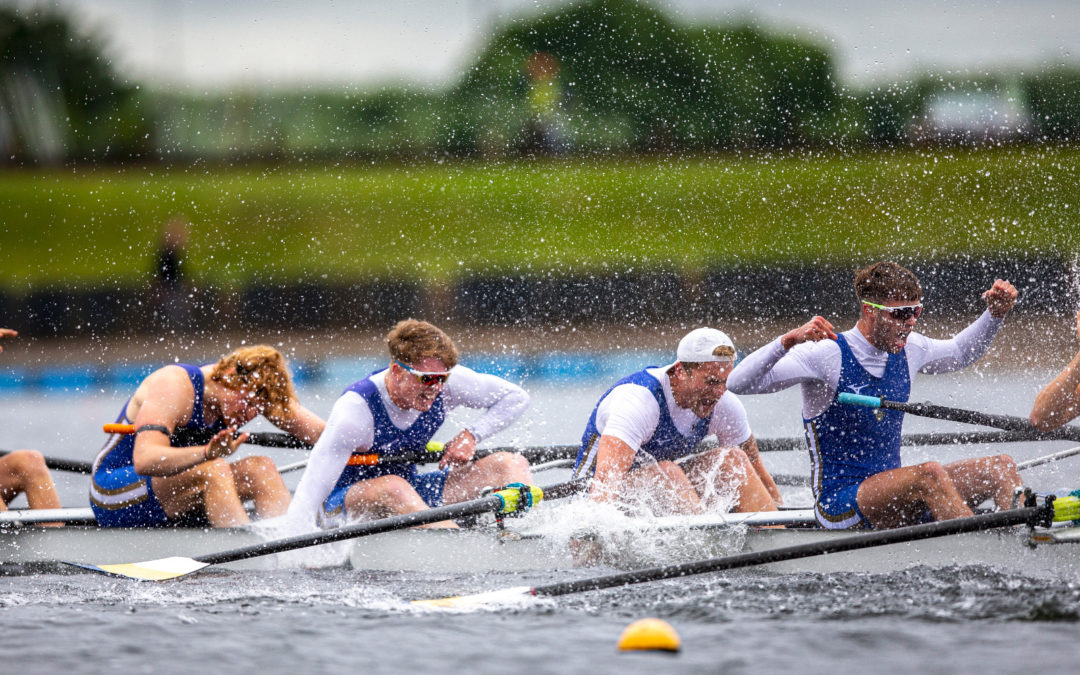 University of Surrey Boat Club enjoyed a highly successful three days at BUCS Regatta in Nottingham last week as they collected a total of 11 medals composed of two golds, eight silvers and one bronze.

It was a record-breaking performance for USBC who smashed their previous best of three medals at Regatta, with this display coming against some of the best crews in the country and on the back of a two-year wait for the landmark event in the rowing calendar.

Here is USBC’s full overview of the three days…

BUCS Regatta is the pinnacle of the university rowing season for the University of Surrey Boat Club and is a chance to compete against the best crews in the country. After a 2-year wait, thousands of hours of graft and multiple lockdowns, USBC was ready to deliver its greatest ever display at the event, demonstrating the tremendous progress the club has made in its pursuit of becoming a high-performance rowing programme. 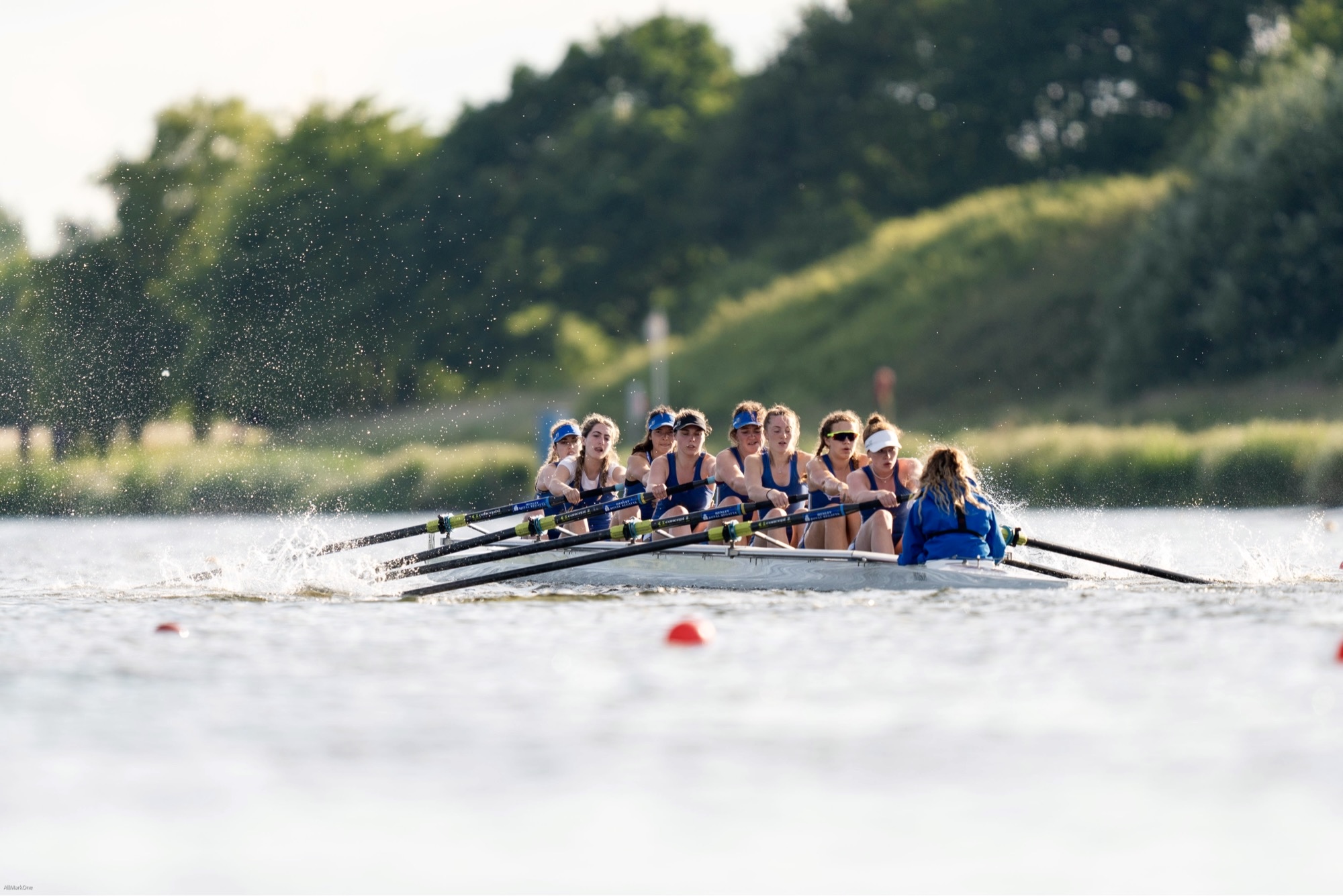 All races initially take place in a 1500m time trial format from which the crews are ranked, and seeded A/B Semi-Finals and minor finals are then drawn. The top crews from the A/B Semis progress to the A-Final, while the remainder are placed into the B-Final. The importance of the time trial cannot be understated as it is the first impressions of each events crews and sets expectations and lanes for the Finals.

There were some exceptional performances on day 1, with the Men’s ChLwt Pair winning their time trial by 4 seconds, two second places in the Women’s ChLwt Quad and the Men’s Inter Pair along with a third place in the MBeg2 Single time trial. All the other crews put in solid performances to qualify for the Semi-Finals or Minor Finals later in the day.

After some great racing in the Semi-Finals, all the above crews qualified for their A finals, in with a chance to win a BUCS medal for Surrey. The races were extremely tight on day one, with USBC coming away with a Silver Medal in the Men’s ChLwt Pair, Women’s ChLwt Quad, and Men’s Beg2 Single. Following this the Men’s Inter Pair achieved a Bronze medal in their Final. This left USBC’s medal tally at four on just the first day, already beating the club’s previous best total tally of three! 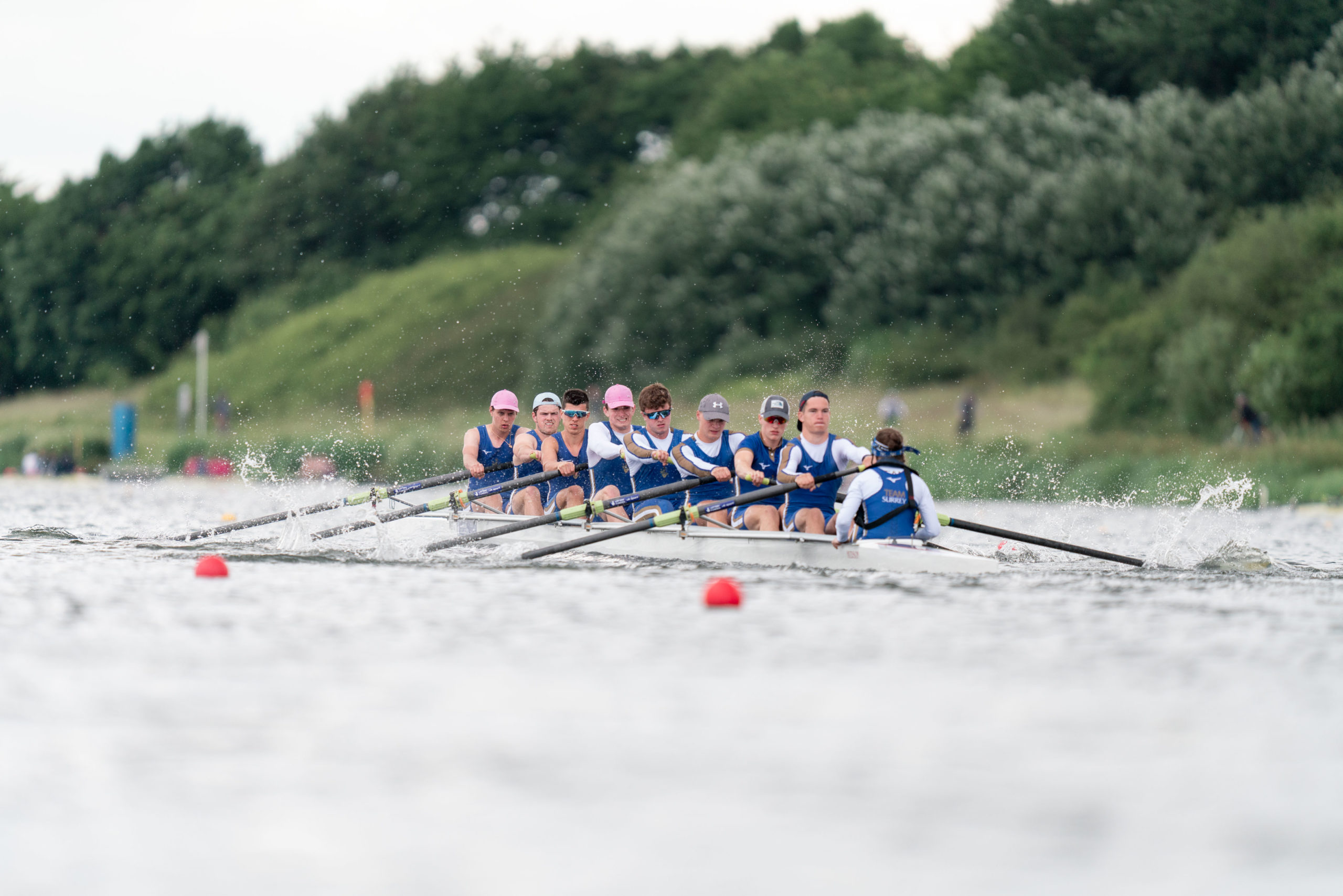 Day two brought more successful time trial results, with both the Men’s Beg Four and the Men’s Beg2 Quad placing first by a considerable margin. The Women’s ChLwt Quad placed second in their time trial, while the Men’s Inter Eight and Men’s Ch Single placed seventh and sixth, respectively. In the Semi-Finals both the Beginner Men’s boats won their Semi-Finals comfortably, while the Men’s Inter Eight fought hard for a third place to qualify for the A final. The Men’s Ch Single narrowly missed out on an A Final appearance but qualified for the B Final after coming fourth in the Semi-Final.

At the business end of day two, following their success in the time trial and Semi-Finals, the Men’s Beg Four and Men’s Beg2 Quad both won Gold in their Finals by a large margin, showing the dominance of the Surrey Beginner’s for a second successive BUCS Regatta. The importance of top-quality coaching in order to achieve success in a beginner event is immense – these results would not be possible without the coaching given this year. The Head Coach at USBC Sam Tuck taking the

lead on coaching the whole squad, does whatever he can to make sure all athletes receive his expert advice. Along with Sam Tuck, there has also been help from Ellie Stevens who was vital to piecing together the beginner squad this year and ensured all crews were race ready. The boat club is exceedingly grateful to the dedication of the coaches and hope this continues as the club progresses in reputation and size.

As well as these medals, there were also silver medals in both the Women’s ChLwt Double, and the Men’s Inter 8+ as they overturned a seventh-place time trial, beating well established crews and boat clubs like University of London and Durham University to come home with a very impressive silver medal. Notably, the Men’s Ch Single placed first in the B Final, coming seventh overall in prestigious line-up including two Olympians.

Achieving four medals on day two put the total of BUCS medals for Surrey at Eight after two of the three days, truly uncharted waters of success that we are enormously proud of. 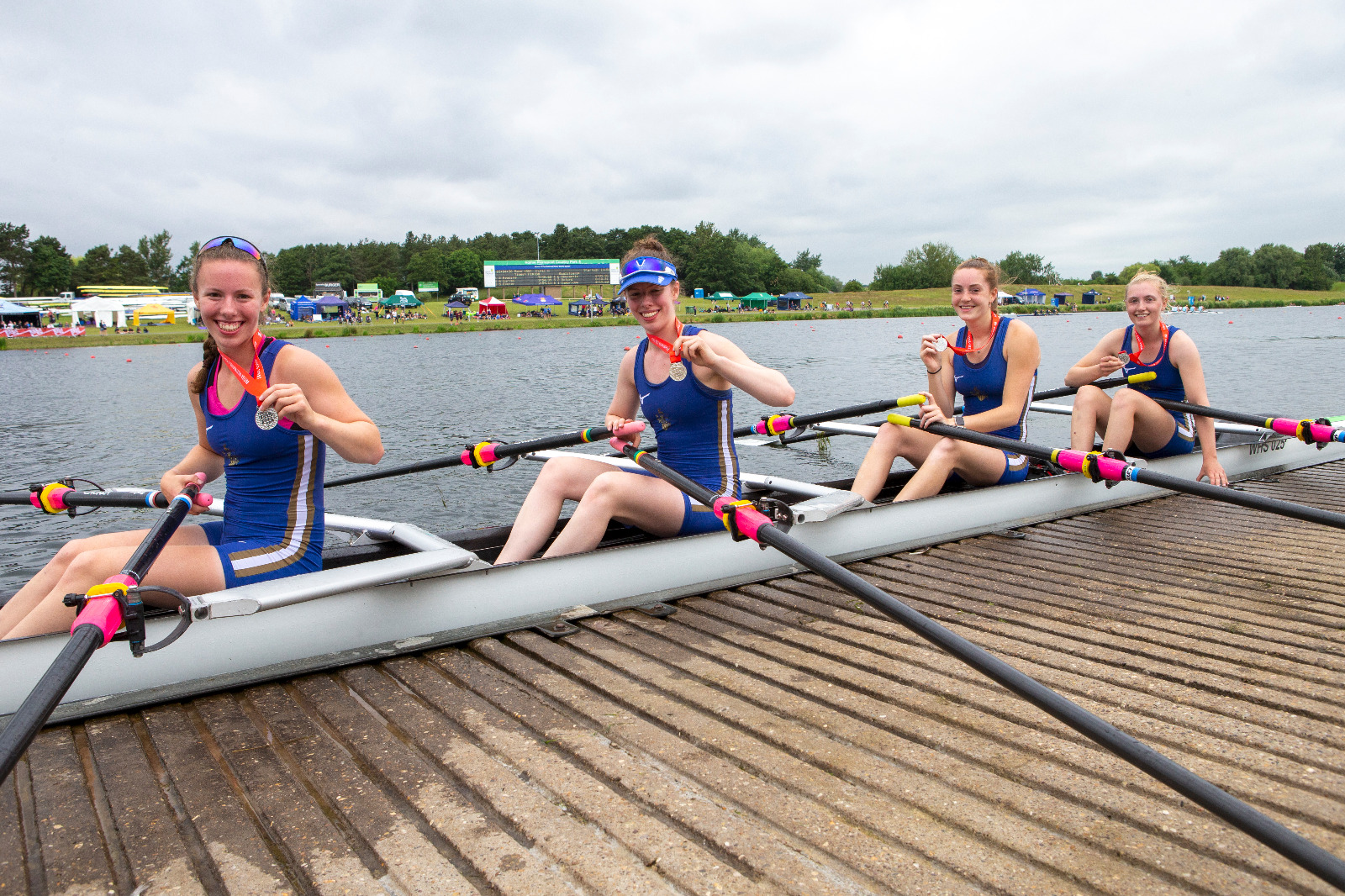 In the Semi-Finals, A final spots were secured by both the Women’s Inter Lwt Singles, the Men’s Beg2 Eight, and one of the Men’s Inter Fours; With the other Men’s Inter Four qualifying for the B Final. It was great to see the Surrey name littered throughout A and B Finals all weekend, putting down a statement to other Boat Clubs about how strong the whole squad at Surrey is, with great performances in all boat classes and categories.

Another three medals on day three for USBC means the final total is eleven medals! Two Golds, Seven Silvers, and One bronze. A summary of these medals: 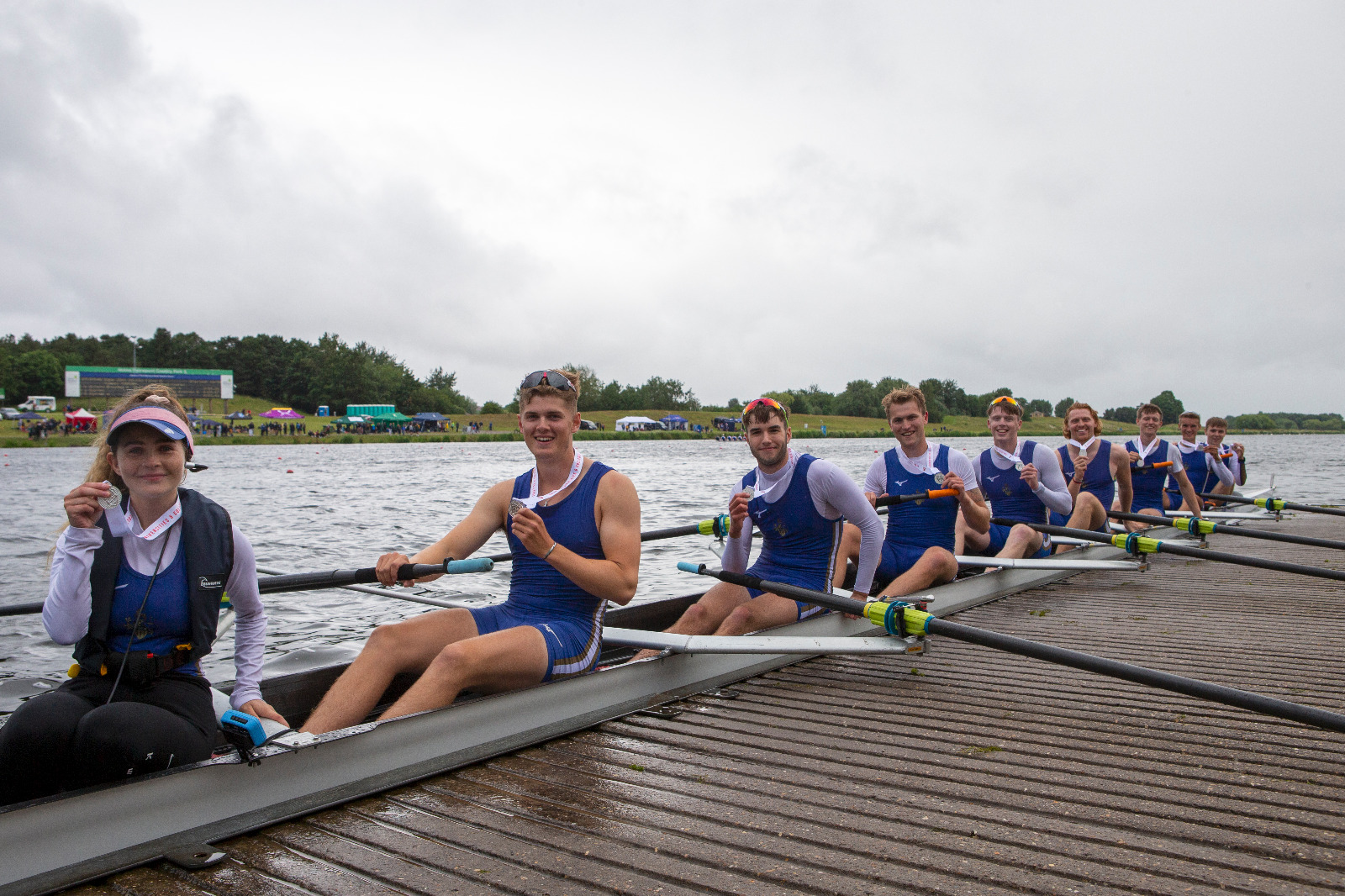 Overall, BUCS Regatta 2021 was a sensational weekend for USBC and by far its most successful event to date, with multiple unprecedented achievements for Surrey athletes. Eleven medals over Three days was record-breaking for the club, smashing USBC’s previous best of three at a BUCS Regatta. This incredible feat is a direct result of the unrelenting and tenacious hard work of all USBC athletes and coaches Sam and Ellie, who are an inspiration to all of us at USBC and have been instrumental in founding the ever-growing and prospering family we have at the club. The Boat Club looks forward to many more years of successful BUCS events, and are proud to represent the University of Surrey as the Club continues to grow.