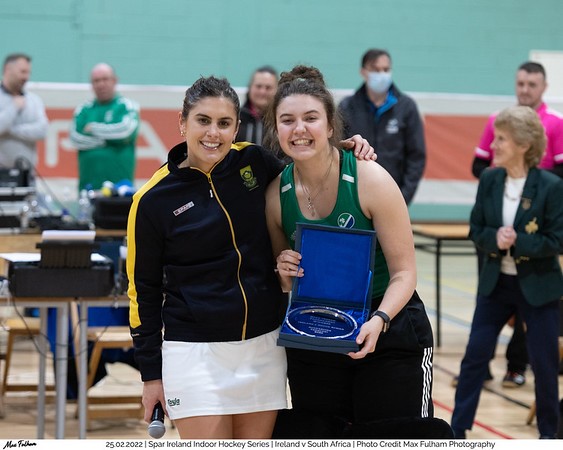 Regan earned the prize following her impressive performances between the posts for Ireland as they played a fast-paced five-match series against South Africa to bring the 2022 indoor hockey season to a close at the end of February.

Speaking after the event,  Regan spoke of the tough opposition that South Africa presented, while she also expressed her pride at representing her homeland on the national stage.

“Coming into this, we knew it was going to be a tough test against the world number 14 and luckily I played my part this week but there were a lot of girls out there on the court who could have easily got that award,” she said.

“I’m very grateful and obviously very proud. Whenever you put on an Irish jersey, it’s a very proud moment and passion is something that comes with the territory with me.”

Regan is a member of Hockey Ireland’s National Development Squad and has aspirations to compete for Ireland in the Paris 2024 Olympic Games. She is also supported by the Ede and Ravenscroft Sport Scholarship at University of Surrey, and says the funding she has received from the scholarship has been extremely helpful in aiding her progression in hockey this year:

“I am extremely grateful to be receiving this award. The aid that this scholarship provides has enabled me to maintain the essential work life balance of becoming an international student athlete throughout my time at the University of Surrey so far. This support is unrivalled and I am very proud to be a student athlete at the University of Surrey.”