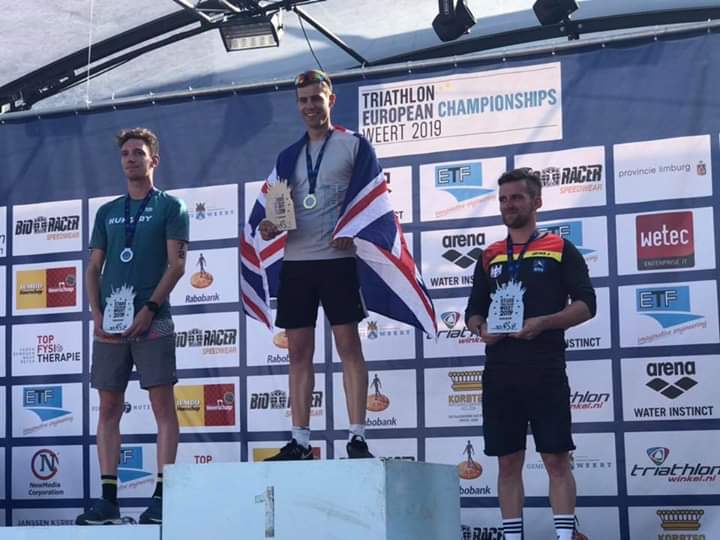 Last weekend, University of Surrey PhD student, Oliver Crossley, attended the Triathlon European Championships in Weert, Netherlands, to defend his title gained last year in the 25-29 category in Tartu, Estonia. With pre-selected athletes from across Europe, the standard of competitor was incredibly fierce.

The race was over an Olympic triathlon distance: 1500m swim, 40km bike ride and 10km run –. Oliver had an outstanding performance, becoming the European Champion in his age group once again, clocking the fastest time of the day overall in every age category.

Oliver is no stranger to success on a world level either, placing 8thin the world event on the Gold Coast in Australia last year. Following his most recent impressive performance at a European level, Oliver is now aiming to stand on the podium at the World AG Championships later this year in Lausanne, Switzerland.

Currently studying for a PhD in Chemical and Process Engineering, Oliver is used to balancing studies and training. Before discovering his talent and passion for triathlon in 2013, he rowed for the University College Boat Club whilst studying at Oxford University, but with the pressure of finals looming, the commitment to rowing was too inflexible to accommodate work. Combining his love of cycling with his childhood interests, he decided to give triathlon a go. 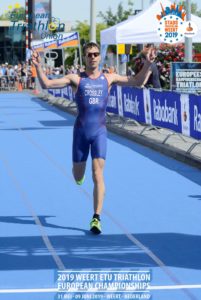 Oliver commented: “I have always been very sporty and I am a strong believer that a healthy body equals a healthy mind. I have always played sport alongside my studies and have found triathlon to be very manageable. The diversity of the three different sports makes planning a training schedule around my work life very easy.”

Oliver’s success is a product of his hard work and dedication, taking time out of every evening and a good portion of each weekend for training. He is a firm believer that there is a synergy between sport and productivity, with one relying on the other. While training for a triathlon and doing a PhD takes a lot of time and effort, Oliver’s friends and family are hugely supportive, training with him and cheering him on to success.

Oliver is currently sponsored by Zone3 and is on the lookout for further backing to support him with his international travel.