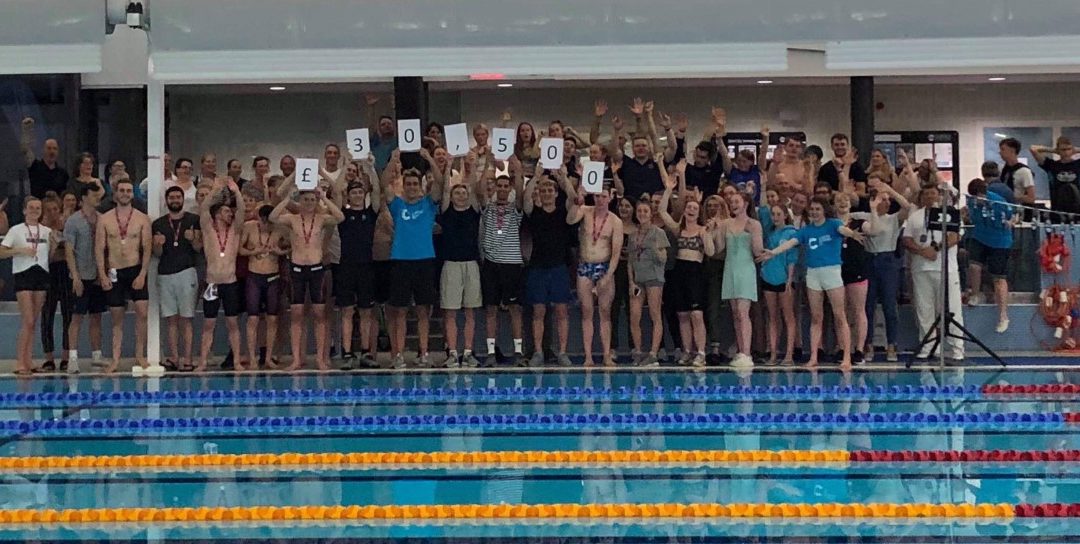 On Sunday 30th June, 100 swimmers broke a world swimming record for fastest 100 x 400m swim relay relay at Surrey Sports Park. 50 male and 50 female swimmers signed up to raise much needed funds for Cancer Research UK, as well as trying to break the record which was set in Australia in 2017,  at 8 hours, 18 minutes and 36 seconds.

Rory Huggins, 20 is a sports scholar at Surrey University.  Both his grandmothers (pictured below, Jean Huggins on left and Janet Jerram on the right) have recently fought and beaten cancer. “I wanted to show my gratitude and raise more funds for such a good cause. I’ve always been fascinated by world records so it seemed a good opportunity to do both.“ 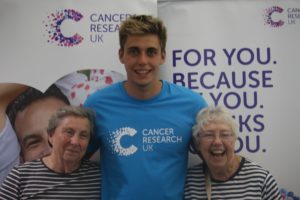 Currently the fundraising total is £33,500 and rising.  Rory said, “I’m blown away by the generosity of the swimmers families and friends, I had hoped we would raise £5,000. I really can’t believe how much everyone has raised to help beat cancer.“

Emotions ran high all day, as swimmers were reminded of their own personal reasons for swimming. “Nearly everyone knows someone who has been affected by cancer and it’s been really hard studying and swimming knowing that loved ones are fighting cancer. All the money we have raised will be put to very good use, I’m sure”

Everyone was watching the clock as it became clear that the record would be broken. As the last swimmer Alex Hicks finished, the pool erupted. The record was absolutely smashed ; 7 hours, 54 minutes, 43 seconds, subject to ratification from Guinness World Records.

It will take up to 12 weeks to verify the record due to the amount of record breaking attempts across the country. Every swimmer signed a Cancer Research UK t shirt and it’s hoped that it can be framed and hung at Surrey Sports Park like the other ones on display around the sports centre.

The event wouldn’t have happened without the support and assistance of a lot of people. The swimmers and their families, the officials, the volunteer observers, Cancer Research UK and of course Surrey Sports Park who provided the pool free of charge and made sure that the event ran smoothly and safely.

Congratulations to everyone who was involved in not only smashing a World Record, but raising such a fantastic amount of money for Cancer Research 💙