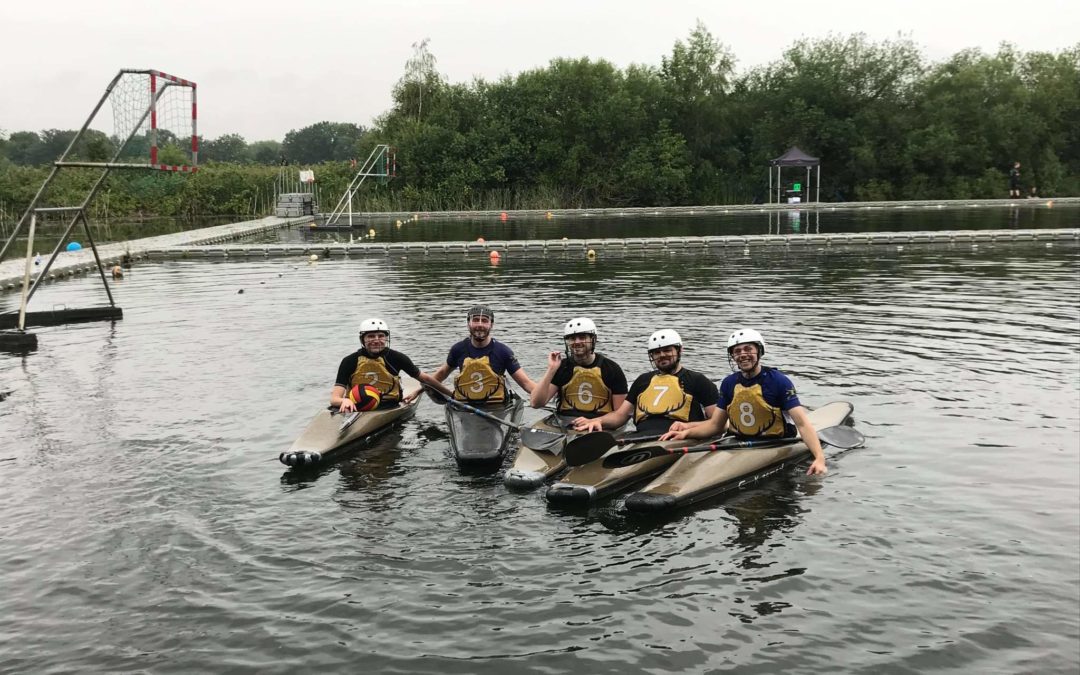 University of Surrey Canoe Club sealed an impressive fourth-placed finish in the BUCS Canoe Polo Championships 2021 which was held in Nottingham at Holme Pierrepoint, the National Water Sports Centre on 3rd July 2021.

Nottingham were the successful side on the day followed by Swansea and Cardiff in second and third places respectively, but then came Surrey whose fourth spot marked a significant improvement on the club’s ninth-placed finish in BUCS 2019.

Here is the Canoe Club’s full overview of the event…

Although the pandemic has limited the time spent training this year, it was great to be able to put together a team to compete for BUCS this year with a mix of experienced and new players.

After an early wake-up in wet conditions on Saturday morning, the team played their first game against Edinburgh. The team were confident going into their first game, but had to keep in mind the lack of experience of playing as a team. Despite this, the team was able to get a win from Edinburgh with a score of 4-3 due to great offensive play by Cameron Underwood. This was a great win and gave insight into how to work as a unit.

Tension was high in the last game of the group stages against Sheffield as we needed to win or tie in order to progress and to not lose on goal difference. The team managed to beat the strong offensive play of Sheffield and win 2-1 thanks to Harry Warman and James Beechey who broke into the opponent’s defence which allowed the rest of the team to go in and score the 2 goals.

The first game of the elimination stage was against Loughborough. This was the toughest game that the team had played so far due to Loughborough’s experience and very offensive play. The team were able to win against Loughborough 5-4 due to good communication and strong defence by James Lang, Harry Warman and James Beechey to take pressure off goalkeeper Will Young and to maintain possession of the ball to force the opposition to the other side of the pitch. These strong plays forced them to move to a different defensive strategy known as ‘5-out’. This strategy is where a team marks each player of the opposition which then created an opening for Cameron Underwood to score a final goal.

Even though Loughborough was the toughest team so far to play against, it was also the strongest the team played and was a great boost for the team’s spirit to aim for a medal position overall.

Unfortunately, the next game against Nottingham ended in a loss of 12-1 as the Nottingham team were highly skilled and good at breaking our defences. A good game and great learning experience for the team.

The team were able to play one final match against Cardiff to decide who would take 3rd and 4th. The team knew they would have to play their best if they were to reach third. But sadly, Cardiff won the bronze position match 6-3 taking 3rd in the tournament, despite great goals by James Beechey and Will Young.

Overall, although the team didn’t obtain a medal position, we are still happy to place 4th in the tournament, which is one of the best results that Surrey have achieved and an improvement from 9th where Surrey placed in BUCS 2019. The team should be very proud of this result!