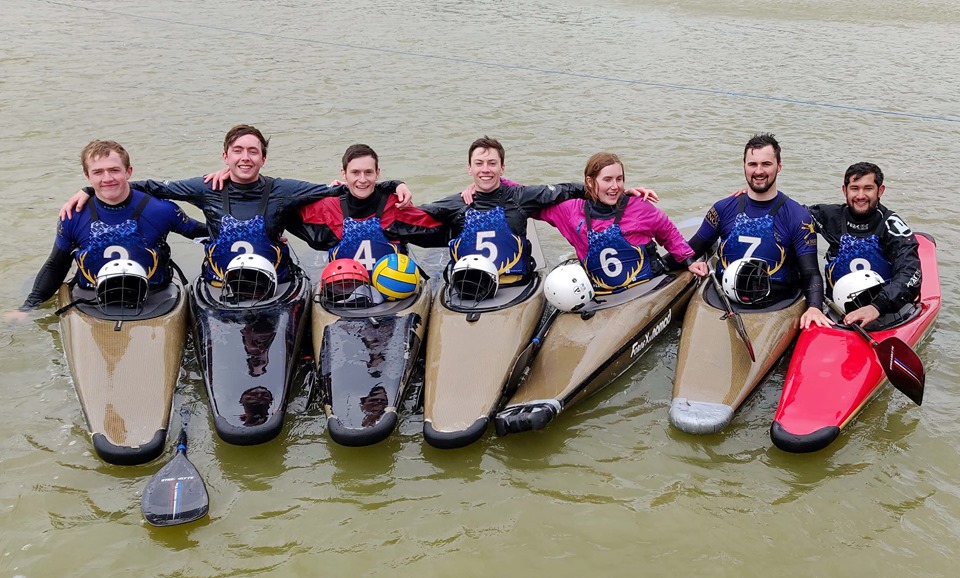 After a year of hard training and a 21st place result last year, the open team arrived at the annual BUCS competition hoping to beat the club record of 17th.

The team woke up to stormy weather on Saturday to face Bangor, who previously placed 14th. After a difficult first half into strong winds the open team went down to 1-0 at half time. The team’s plan to play cautiously in the first half due to wind, then play very offensively in the second, worked to secure the open team a 3-1 victory.

This put the open team in a tough second seeding game against Nottingham, who previously placed 4th. It was a difficult game, with a result of a 4-0 loss. Nottingham played some great polo, but some great goalkeeping from Kiran Prinjha kept this tally low.

Our next seeding match was to decide if we’d make the top or bottom half. The team faced Newcastle, which was a comfortable win for the team, including a well worked goal from tight in the zone by Eoin Cremin. Morales were high after this match after already beating the club record of 17th place.

The open team then went on to play two more seeding games to work their way up to the top 12 bracket, with a  3-1 win against York and 4-0 win against Bristol. This was great news until B Team captain Will Young noticed that where the open team had beaten Newcastle 4-0, the result was listed as the reverse, with Surrey now playing for the bottom half.

After tense negotiations with the organisation and referee team, it was noted that the open team should have played against Sheffield, not York in the next seeding game. The only option left was to play against Sheffield and nullify the previous two games, a big morale hit for the team, who were changed into warm clothes and had thought they were finished for the day.

The team rushed back for a final match against Sheffield, probably the best display the open team had put on to date, ending in a 3-1 win. According to the organisation team, Surrey was now in the top 8, which with some skepticism led for massive celebrations, until the playlist was again rewritten, showing 9 teams in this bracket, so Surrey Open had to play for 1-8th or 9th-12th against Swansea at 7am the following morning.

Morale was still high for the open team, with top 12 being a phenomenal result. The seeding game for 9th/10th vs 11th/12th was against Southampton, a team close in friendship and rivalry. An intense game saw Surrey take a 2-1 lead in the first half, after a disallowed goal from Southampton and fantastic defense from Daniel Smith. With only minutes to spare, Southampton adopted the rarely used ‘5-out’ strategy where every player is permanently man-marked, allowing for Southampton to make it 3-2. The team quickly adapted, however, and were able to hold out for the remaining few minutes. This win was monumental for the open team, and showed fantastic composure all around.

The final game was against Loughborough to place for 9th/10th, the open team went into this game with a breath of confidence, with two early goals to bring the game to 2-0 by half time. Loughborough quickly responded with a well worked goal, but some quick thinking from Devon Francis allowed her to take a quick restart, pass to Cameron, who was able to convert it from the halfway line. Another late goal from Cameron confirmed the victory to Surrey.

A phenomenal 9th place was claimed by the open team from the top 25 universities across the UK, which considering the 21st place last year, difficult seeding and vast array of GB world champions spread through the top 8 teams, is a fantastic result, massively exceeding the already high expectations the team had made for themselves.

Amazing job, you should all be so proud of yourselves!